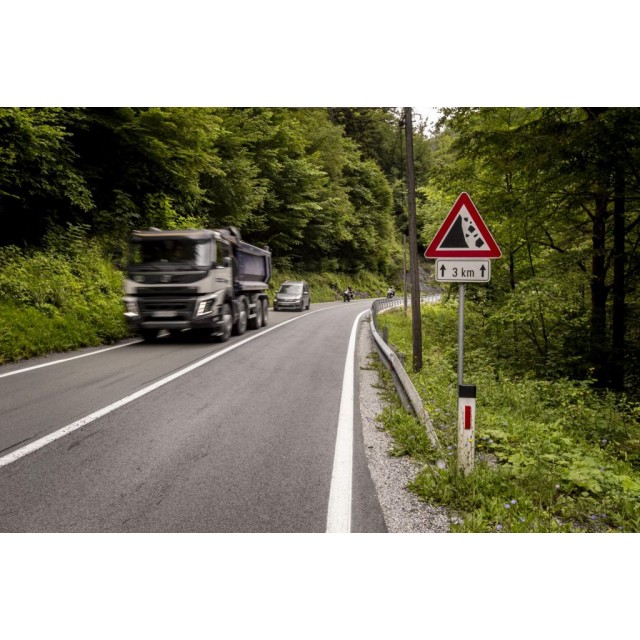 HALF AND FULL CLOSURES OF THE IDRIJA - GODOVIČ ROAD

On 4th March 2019, the Directorate of the Republic of Slovenia for Infrastructure signed a contract for the construction of a covered cut on the Spodnja Idrija - Godovič road in Zala (Jelični vrh). Works worth EUR 2,982,397.88 will be carried out by Kolektor CPG d.o.o company.  Due to the limited space, it will be necessary to fully or half close the state road during the construction period.

Planned works on the Spodnja Idrija - Godovič road in Zala (Jelič vrh ) and the indicative duration of the closures:

In 2019 - during the first construction period - the following activities are planned:

It is planned to remove a part of the bank in order to obtain the required width for the covered cut, the pile construction and the foundation works. The bottom connecting beams for the covered cut and its back wall will be executed.

Outside of this period, there will be occasional, short-term, 30-minute-long full closures in cases of necessary manipulations on the construction site, which will be carried out outside the traffic peaks. At the end of the first construction period, a two-day full closure is planned to arrange the two-way carriageway. The later will be ready before winter. In the winter time, no activities and closures are planned.

In 2020 - during the second construction period  - the following activities are planned:

During these periods, the installation and the dismantling of the ceiling panel will be carried out. The last anticipated one-day closure is intended for the execution of the asphalt finish on the road.

For the rest of the construction period, the works will be carried out during half closures with one-way alternating traffic.

THE FOLLOWING DETOURS ARE ARRANGED DURING FULL CLOSURES:

The detours will be arranged on state roads, as follows:

- for all traffic above the total weight of 7.5 tons: Logatec - Nova Gorica - Tolmin - Idrija,

Similarly as last year, an internal special traffic regime is planned during the time of full road closure:

• in the direction of Trebija - Sovodenj - Cerkno - Želin, truck and tow vehicle traffic is also allowed from 10:00 to 12:00 hours, during which time the driving ban will be in force in

It is advisable for drivers of personal vehicles to use other possible routes at these times.

24 hours a day.  The information is provided by the Police, maintenance staff and others so the website always offers the latest available information on the state of the traffic.

We thank all users for their understanding and tolerance.